“What does it matter to us, my heart, the sheets of blood
And of red-hot coals, and a thousand murders, and long howls
Of rage; sobbings from every inferno destroying
Every (kind of) order; and still the North wind across the wreckage
(…)
Who should stir the vortices of furious flames
But we and those whom we imagine brothers?”
Arthur Rimbaud, Collected Works, 1962

Milk brothers, blood brothers. The artist; women, men and children, is the victim of never-ending war. Here, in other places and in every place where barbarity prevails, it calls people to become the saviour of betrayed innocence and shredded dreams. It resists crying in order to invite people to rebellion and instil hope. It buries deep its pain. It goes through the house with its bosom ripped, it packs a few rags and goes to join the exiled convoys that push prams. It is Turkish, it is from Vendée. It is the Hittite warrior moribund and riddled with arrows in the frieze located in the museum in Ankara. It is the villager of Western provinces garrotted by the hellish armies of the French Revolution; it is the woman crying and cradling her dead child in Picasso’s painting; it is the imprisoned friend who disappeared in those years when the air was as heavy as lead; it is the adolescent from Baghdad who has lost his arms to bombs; it is the little girl and her maternal grandmother slaughtered in front of the Galata synagogue… How should one reconstruct the oasis of peace that has been pillaged, pelt terror and seize once again the daybreak?

After surviving disasters, it becomes an ironmonger, a weaver. It bands together the fingers separated from one another by feckless anguish; it collects swords, daggers and broken pieces of glass; it quietens hurricanes; it beats lead with a hammer; it nails flat pebbles onto lead and finds news to be heralded. It disrupts silence, pushes boundaries into the distance and gifts a thousand handkerchiefs to a thousand strangers so they can adorn them with their dreams. It sews flags and mingles with the crowds passing through cities: “Europe, Asia, America – vanish! Our march of vengeance has occupied every place…” It never surrenders, it echoes the scream of Guernica.  A sharp glass cone pierces through both canvas and time: No to War! – Non à la guerre!

In the gallery divided into two like the human heart and with white-tiled floors, it lodges its letters into walls like the beribboned lances matadors thrust into bulls and unfurls crimson banners. It attaches its rage on to the walls, raises its flags of joy and adds space to space. The Cholet handkerchiefs, the old flag of rebellion for insurgents and oppressed workers, reattaches the new dreams of each and every one of them to the revolutionary utopia that snaps and scatters. Red squares, white squares: violence and love are the warp and wrap of every life. Art is the definite vanishing point of the singular and plenary and experience and collective action.

“To stir crimson”**, it gleams because it “stirs crimson”, “the quasi-stellar night of love” and unites creative energy under the same flag. It pays tribute to the superior gifts of friends and strangers who wrote letters to the sun and the wind tied to Anatolian trees, and who painted and drew nomadic votive offerings; miniatures that are as delicate and naïve as pieces of garment with valuable and provisory peace amulets; illuminated letters and emotional images from the moving world.

The boat and harbour, the white gallery that is the campaign marquee of the sultan, the envelope and the enclosed are about to depart. Chests need to be nailed down, clothes need to be folded and tapestries need to be rolled. Chests full of relics are ready to be shipped. Their destination: Cholet, France. Small plaster soldiers sent as messengers consort a chest filled with a hundred lead envelopes that call to rebellion. In order to take over the flag a thousand strangers embroidered their dreams on to a thousand white Istanbul handkerchiefs. In the Museum of Art and History the artist will be covering the war paintings and rubble consumed by blood and rust with handkerchiefs that bear the colours of hope and life. War is the only real obscenity.

It – the artist – appeals to the innocent astonishment and insurgency of childhood in order to break the spell of scheduled death. It puts the forgotten common language of preliterate and preverbal periods onto paper. Its letters made of fabric and lead declare once again that art is a moral source of power and bearing, and that it has to re-forge a bond with life and recreate meaning from scratch while demanding closedness and disengagement from life. Red flags, white flags: it rejects defeat and sides with vandalism. When reality lays its hand on dreams and the entertainment industry formats and sterilizes dreams, helping dreams nurture reality is the common and urgent duty of art and politics. The only response the artist can give in order to enliven the world is to reach out to someone else. 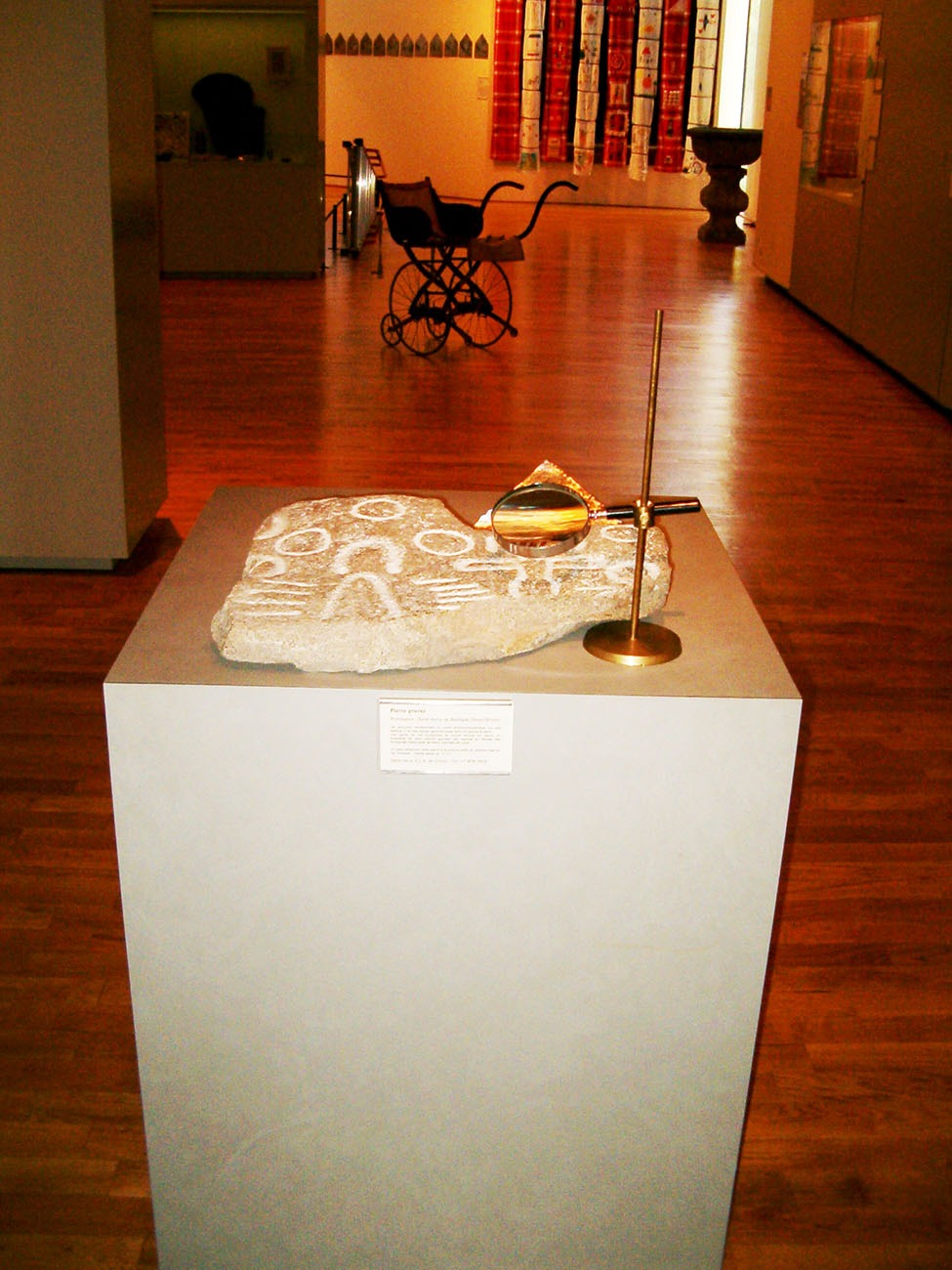 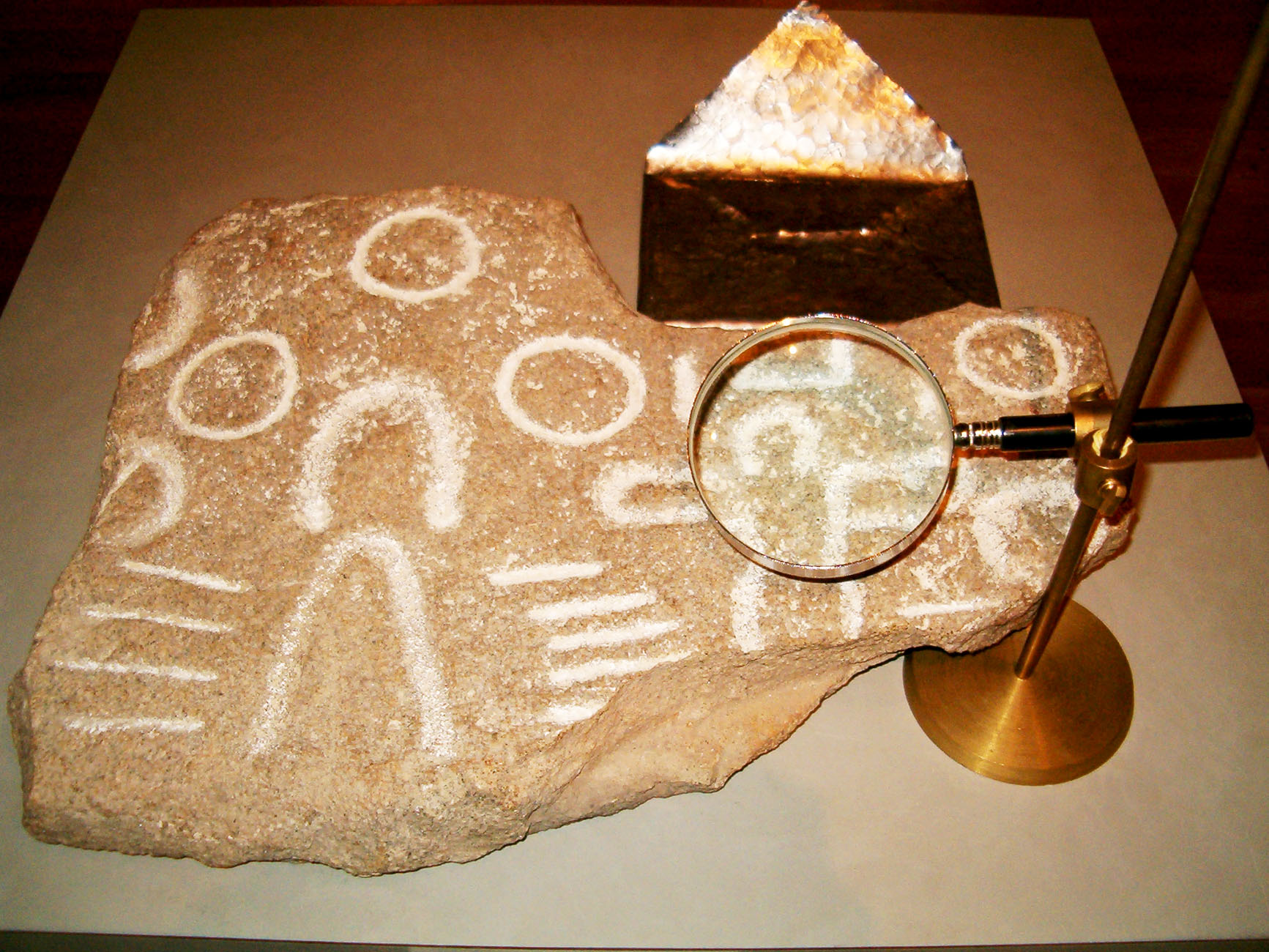 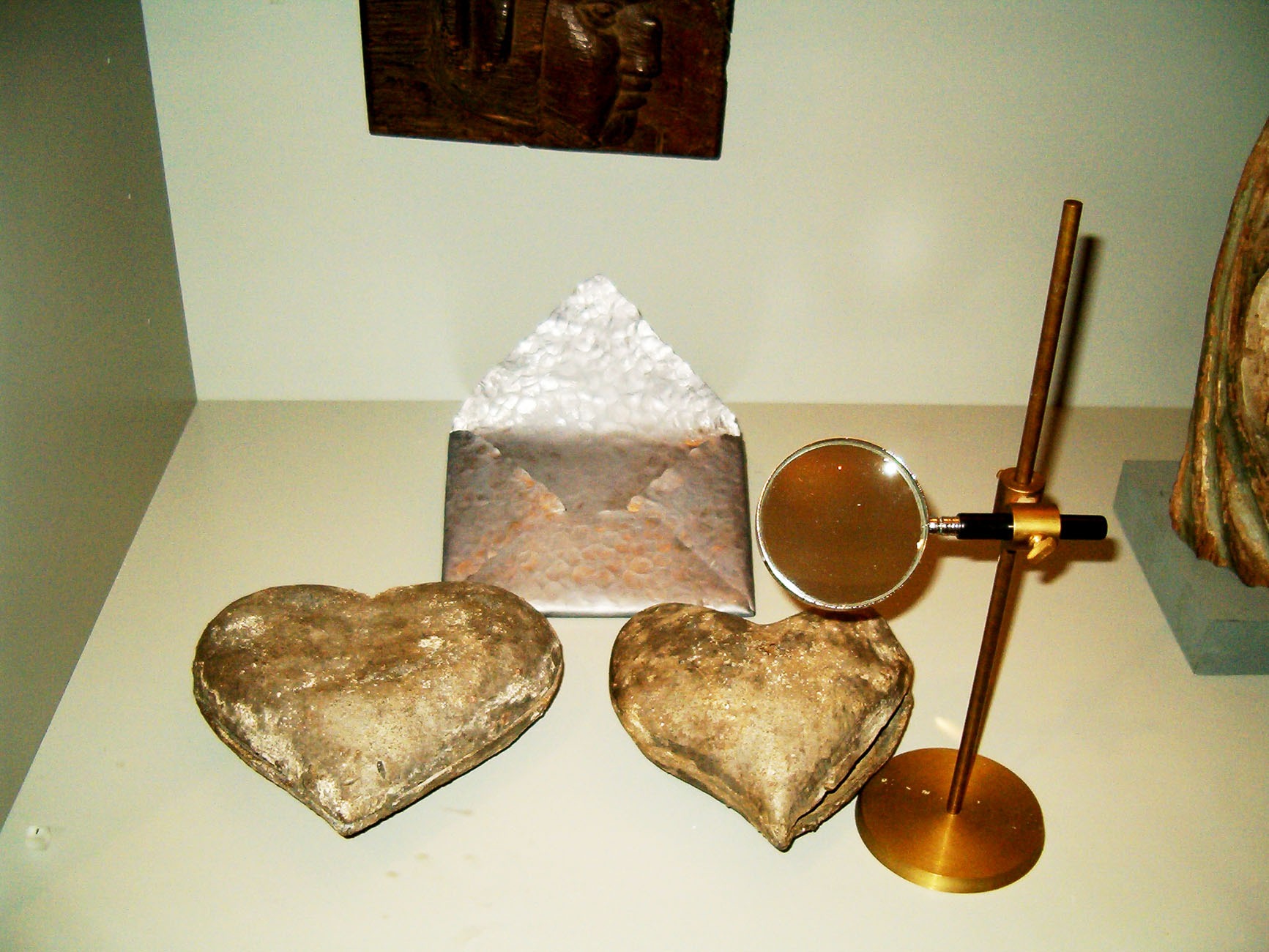 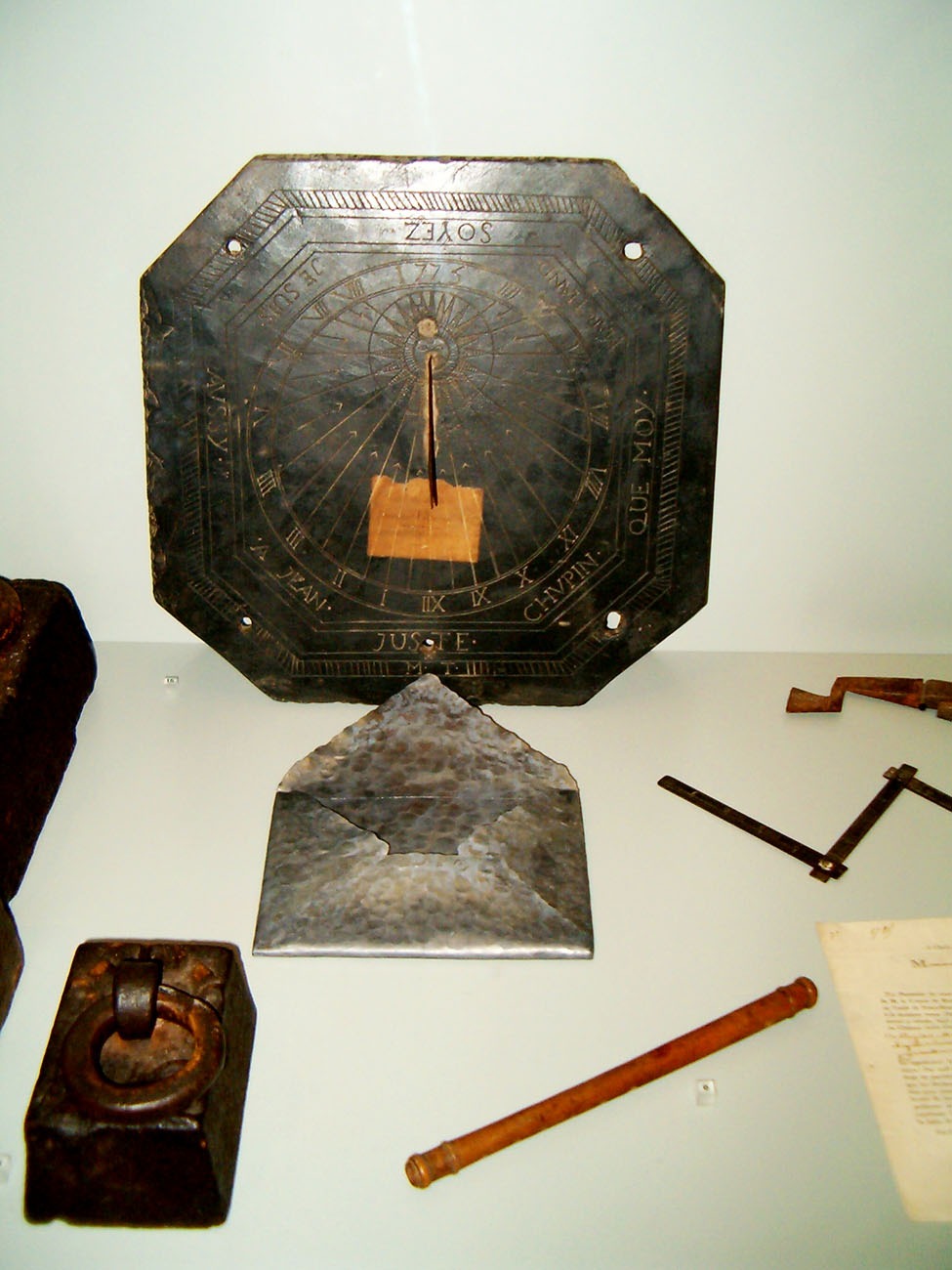 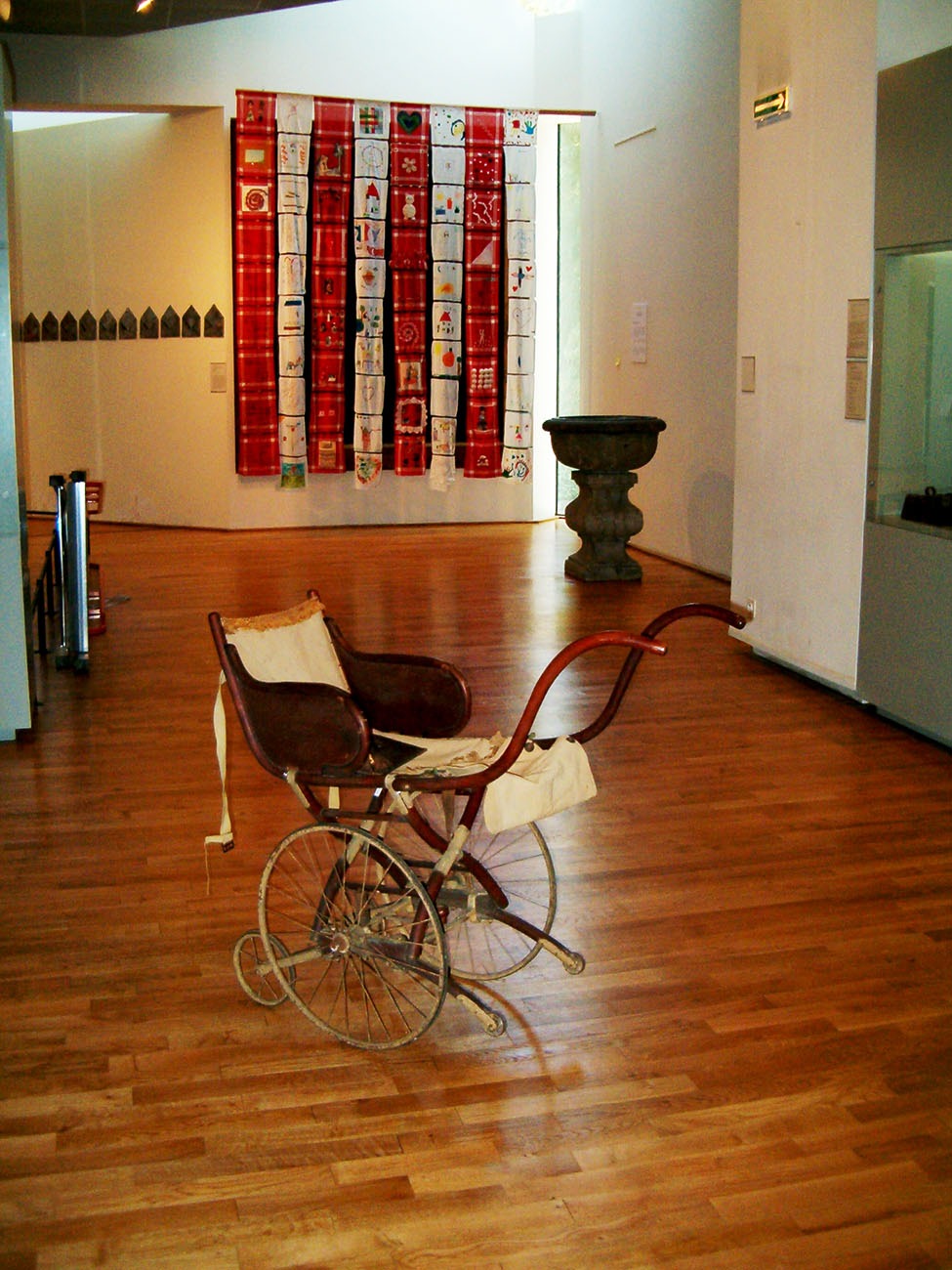 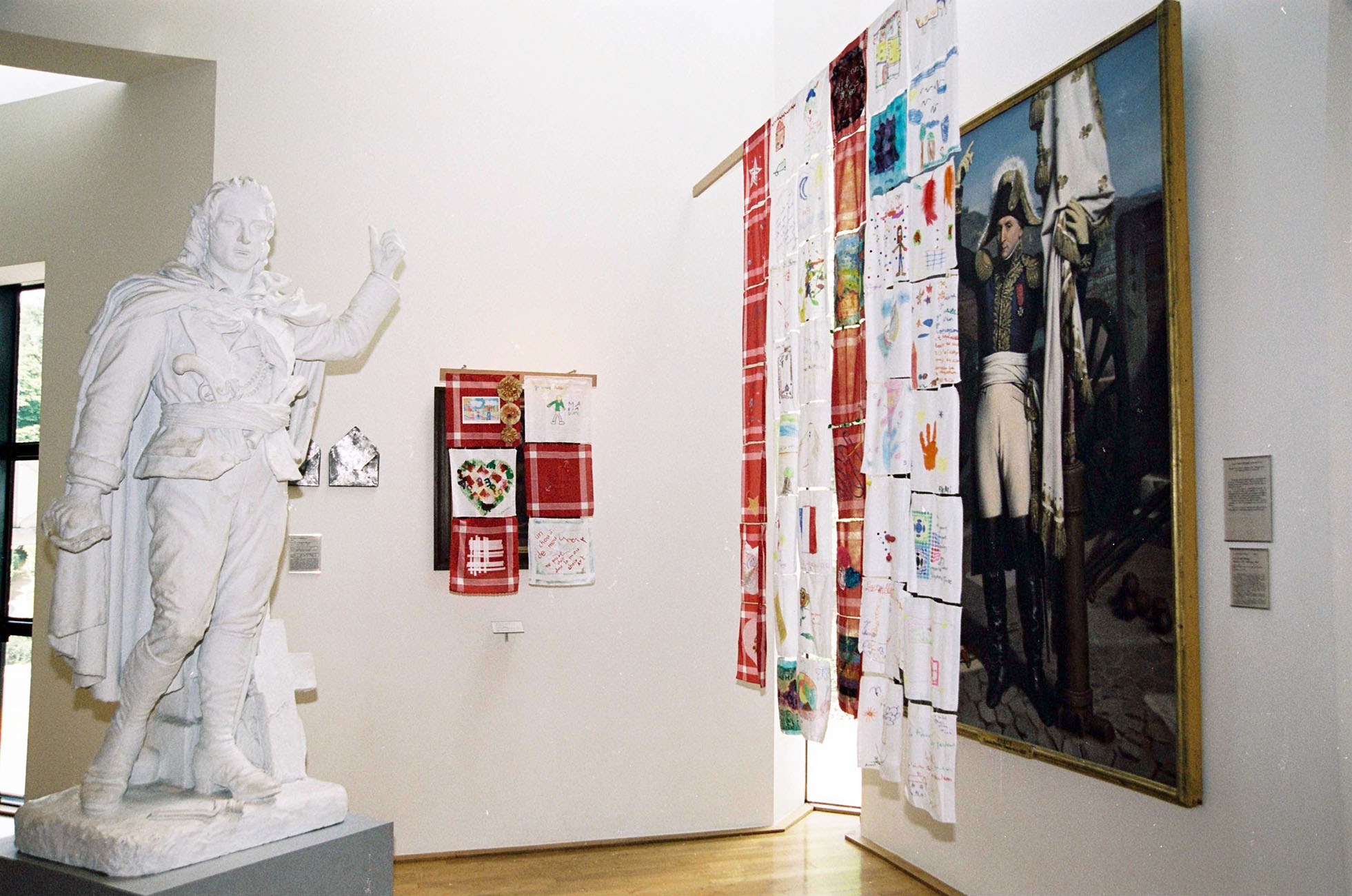 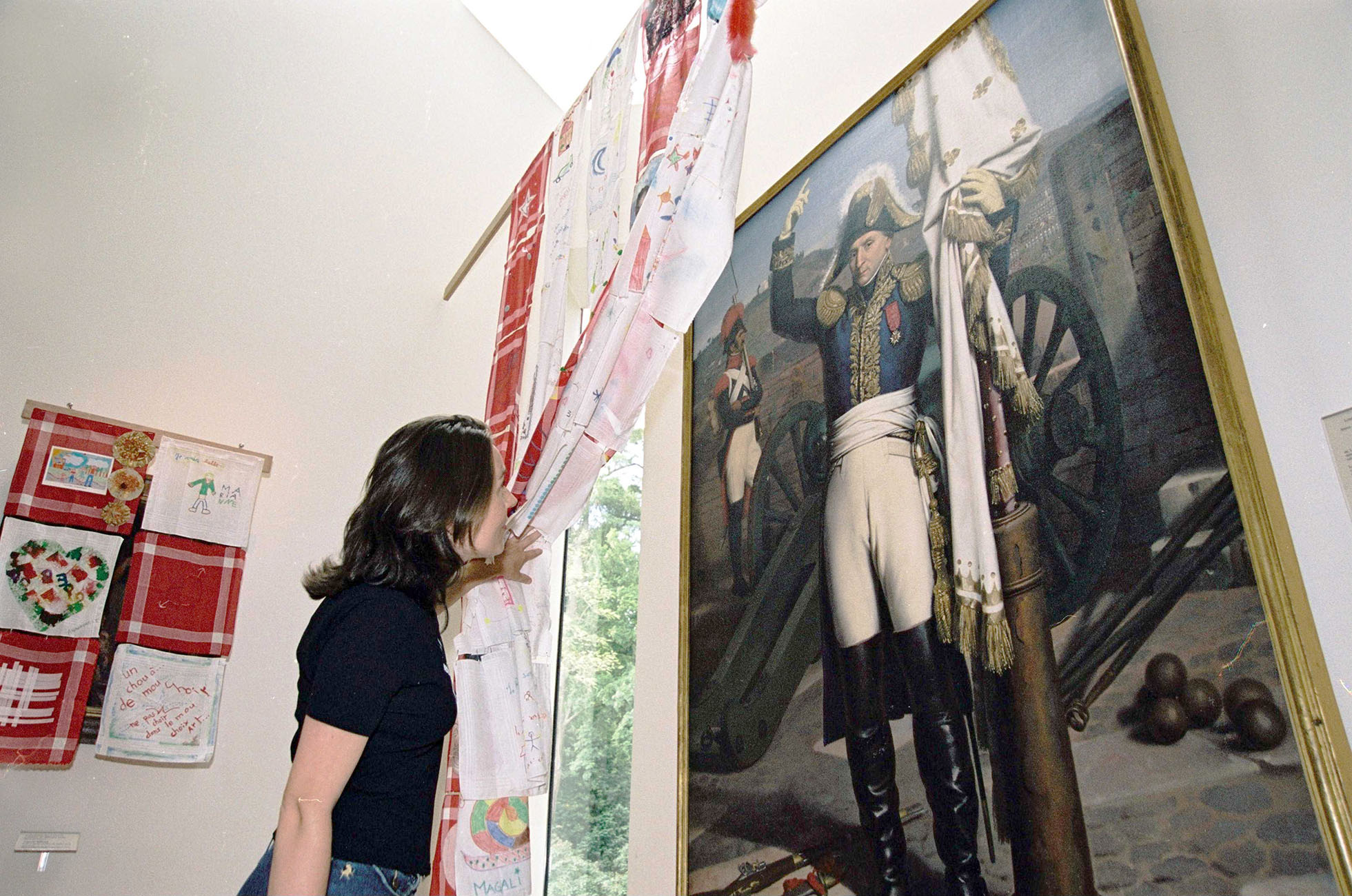 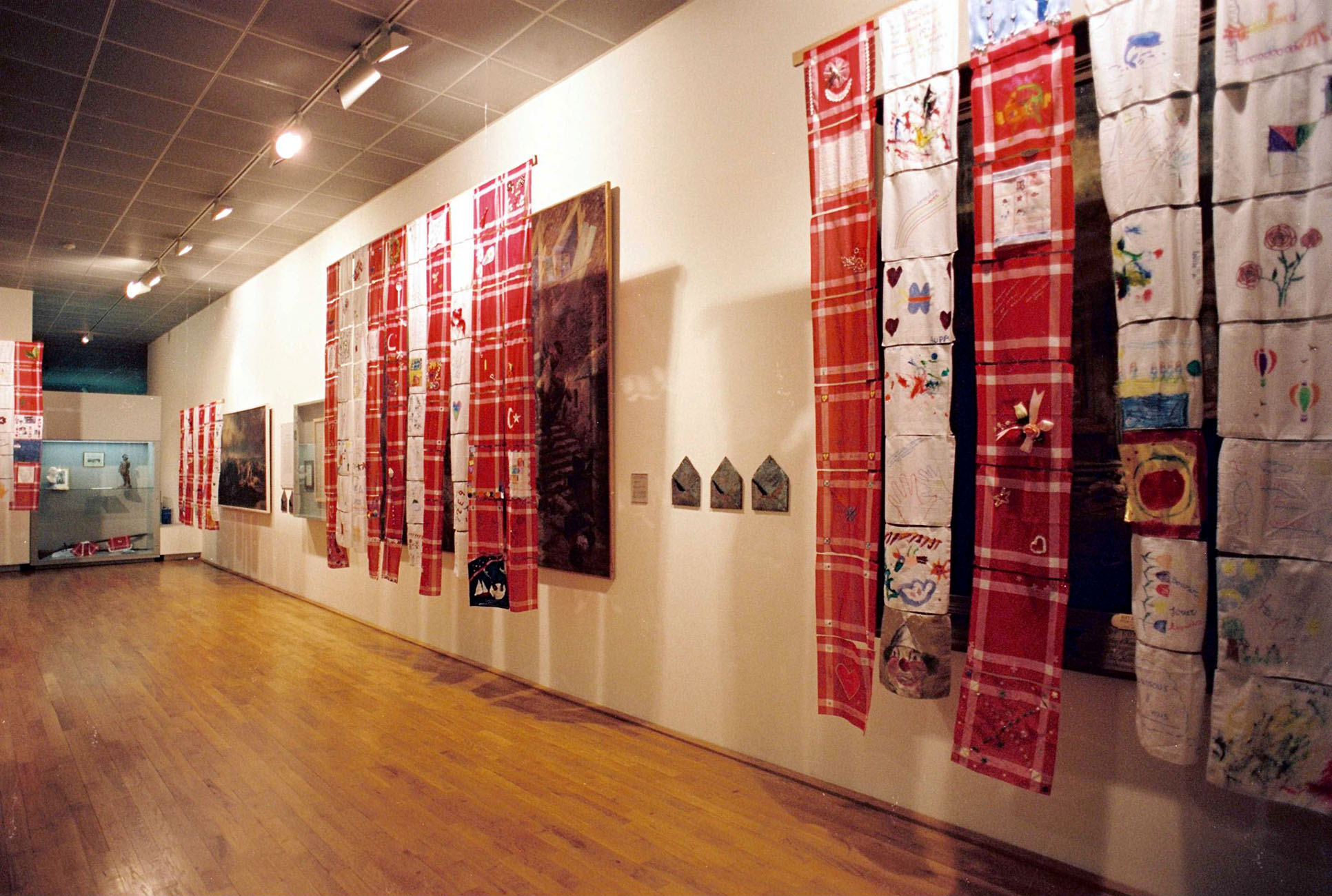 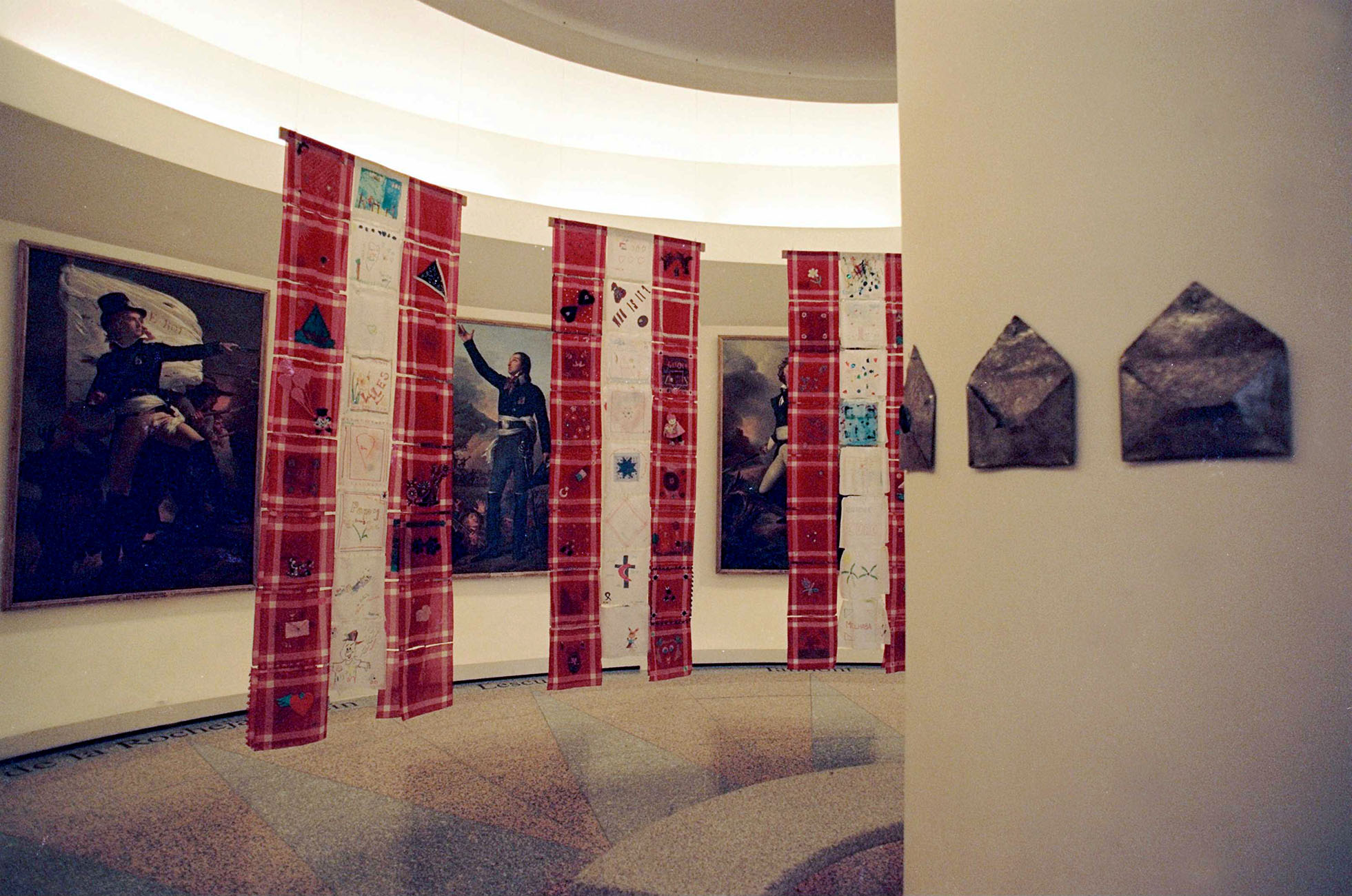 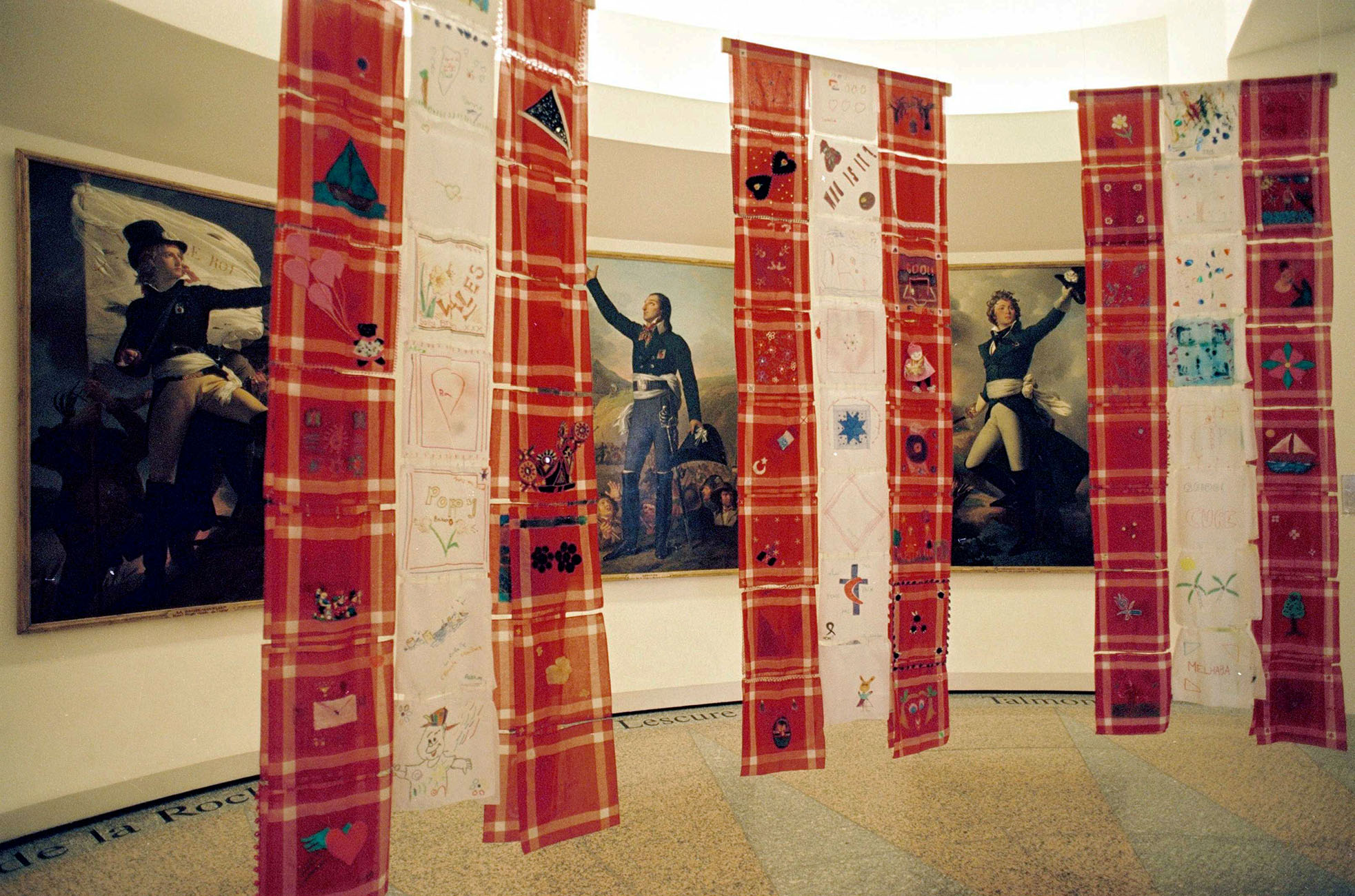 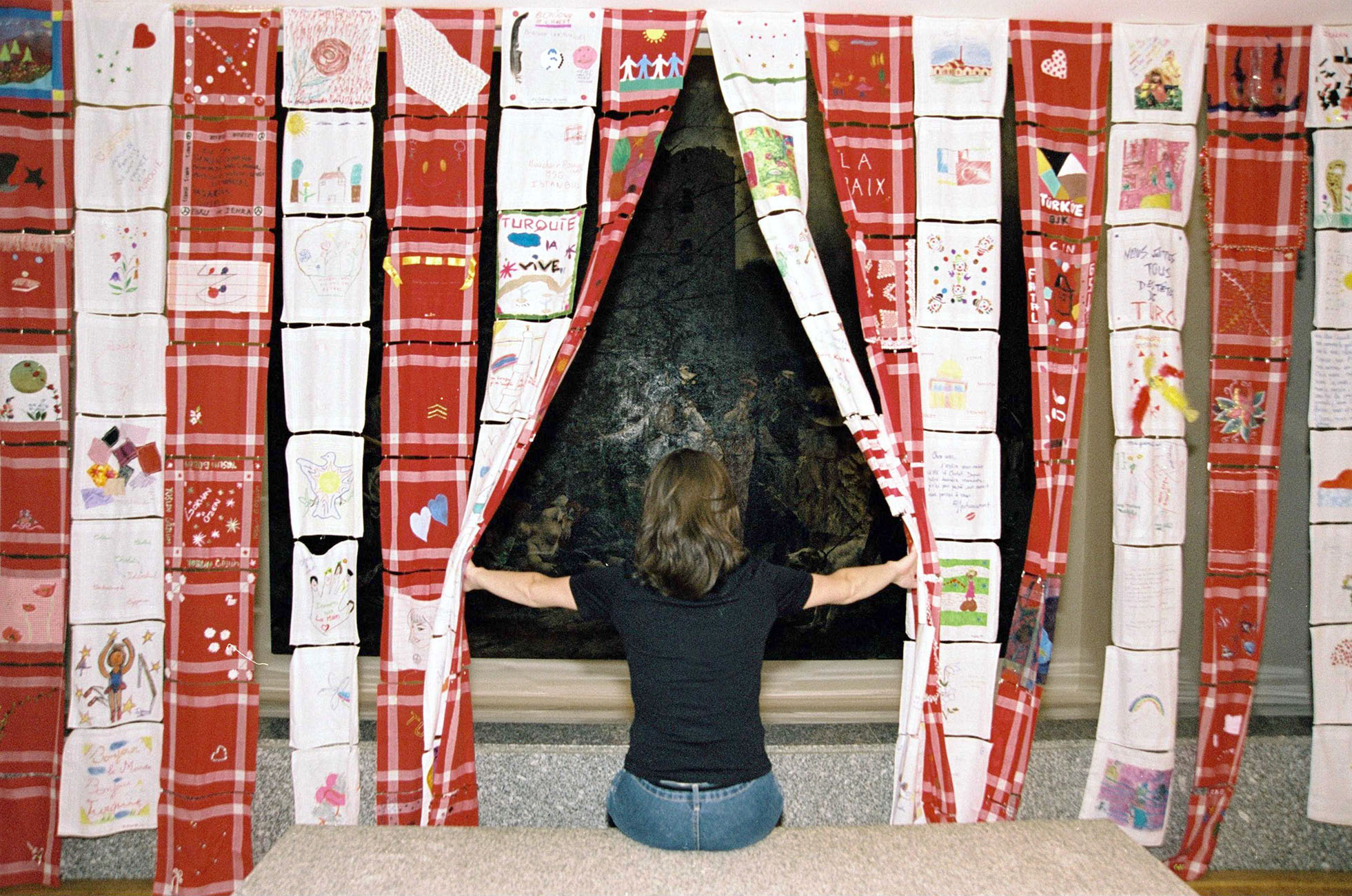 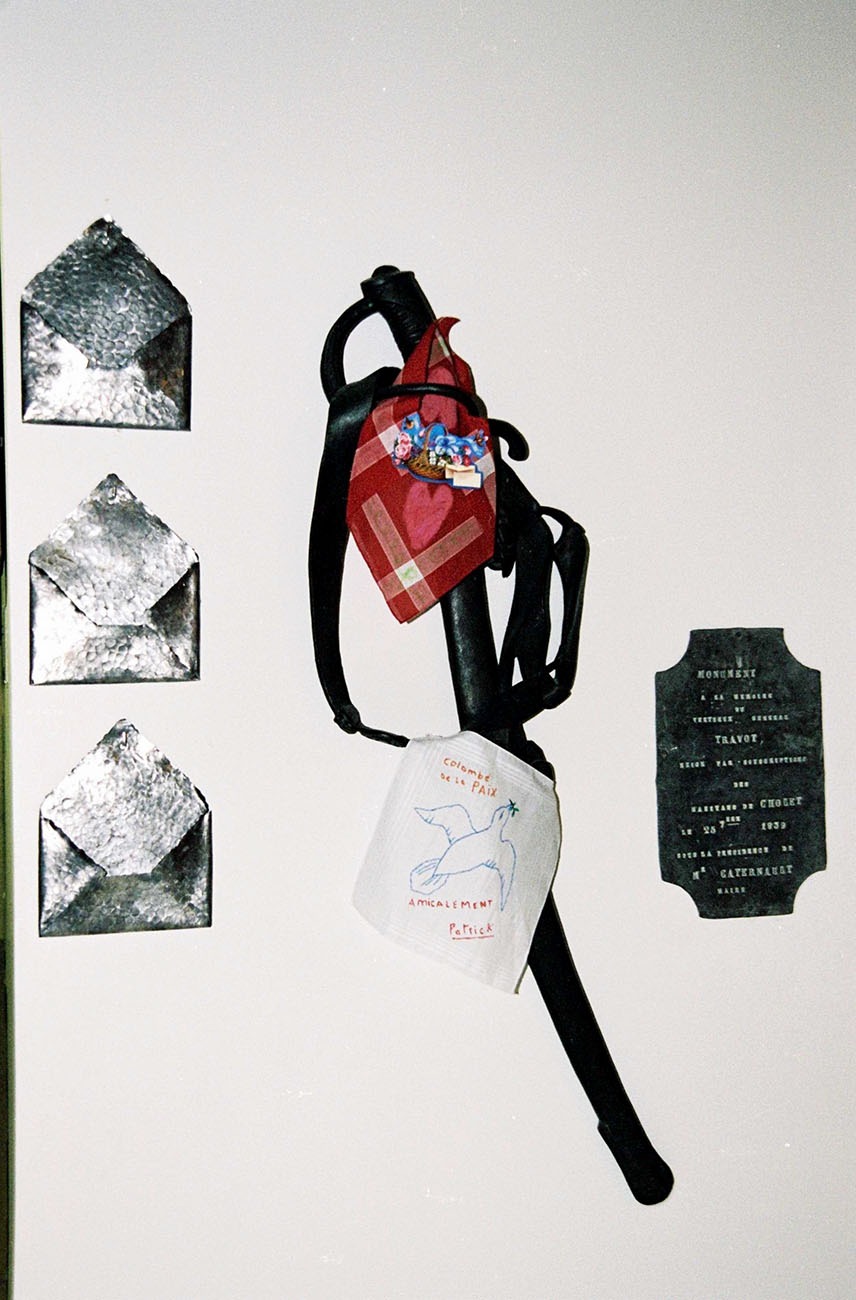 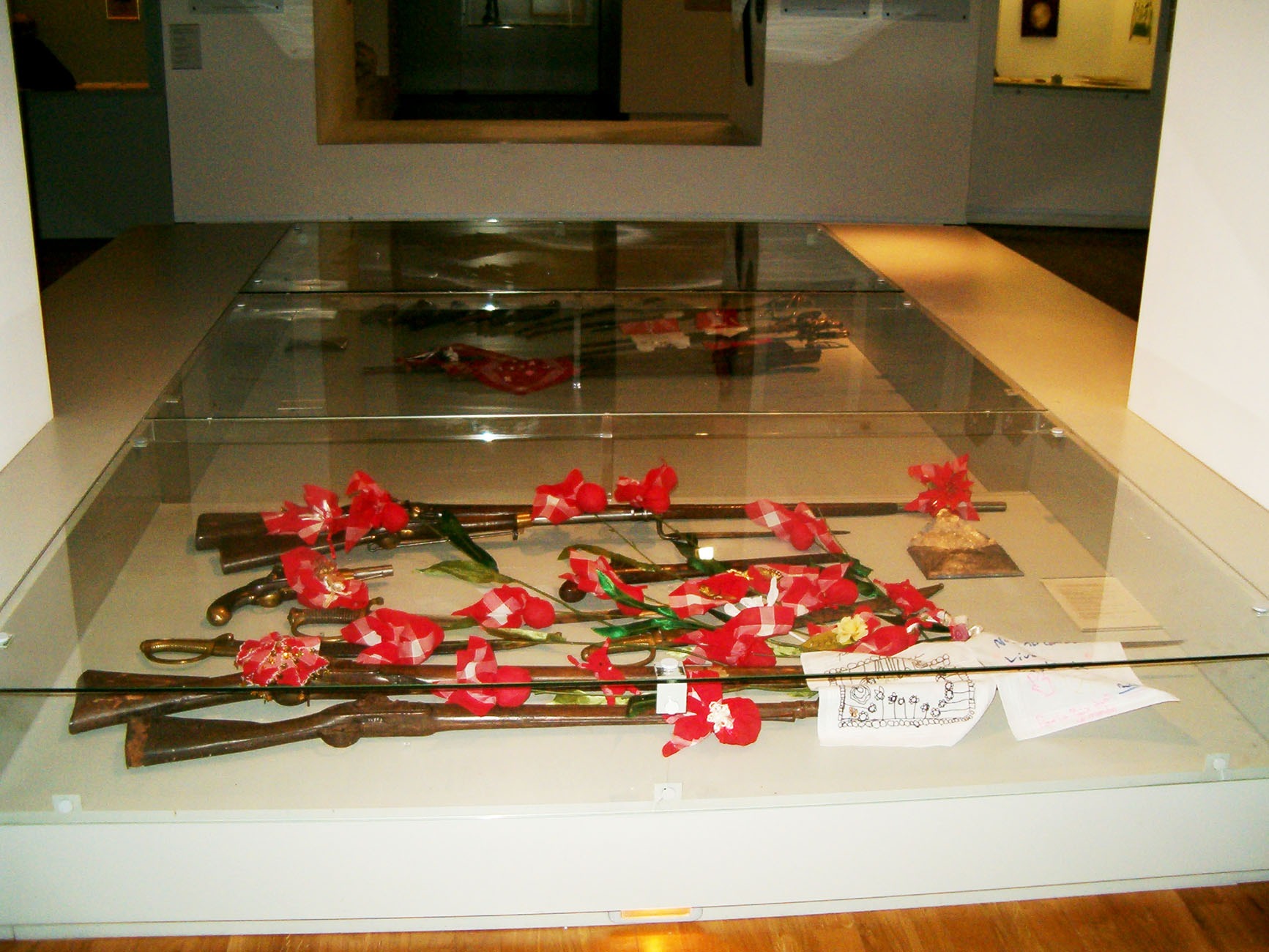 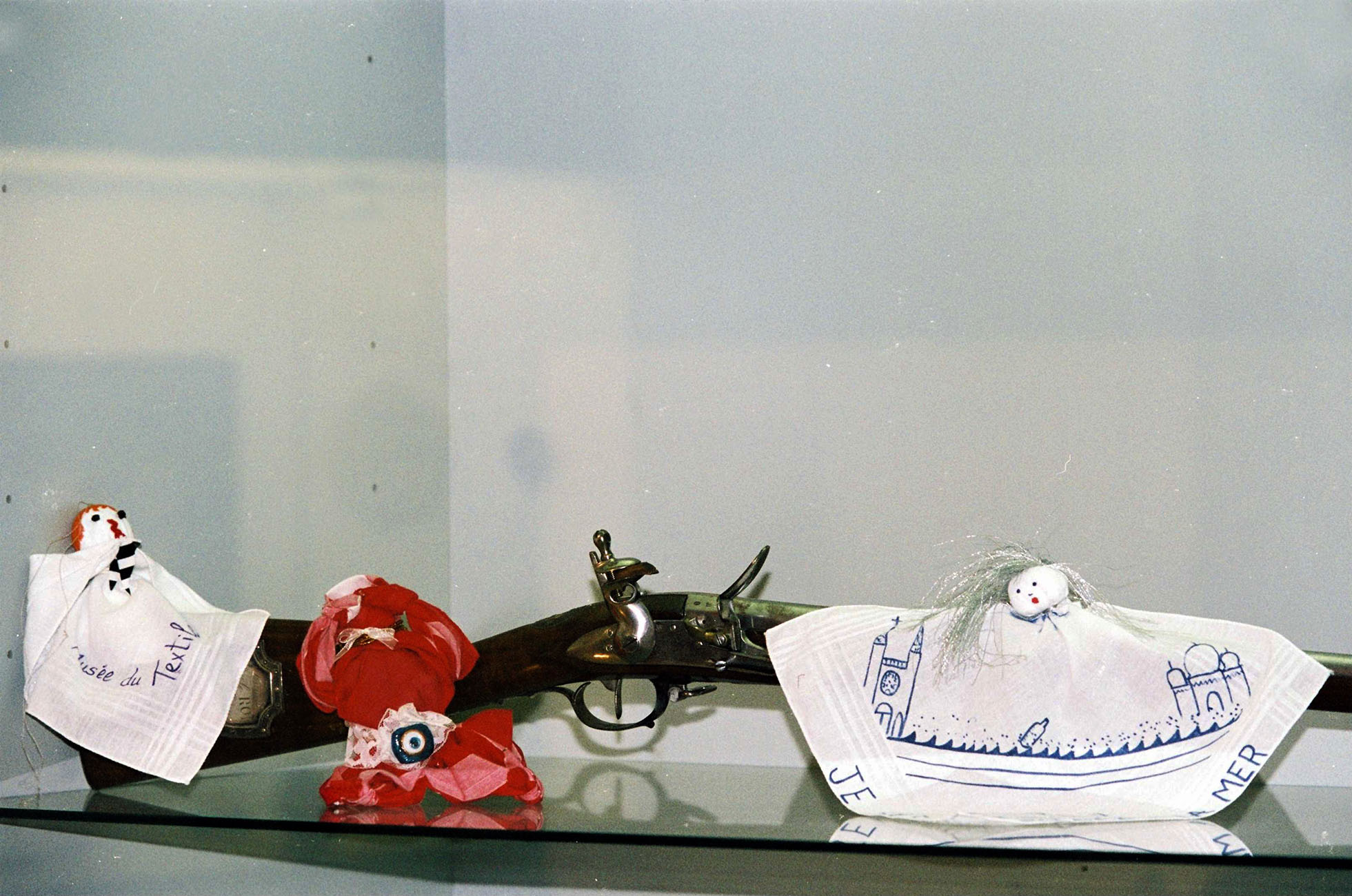 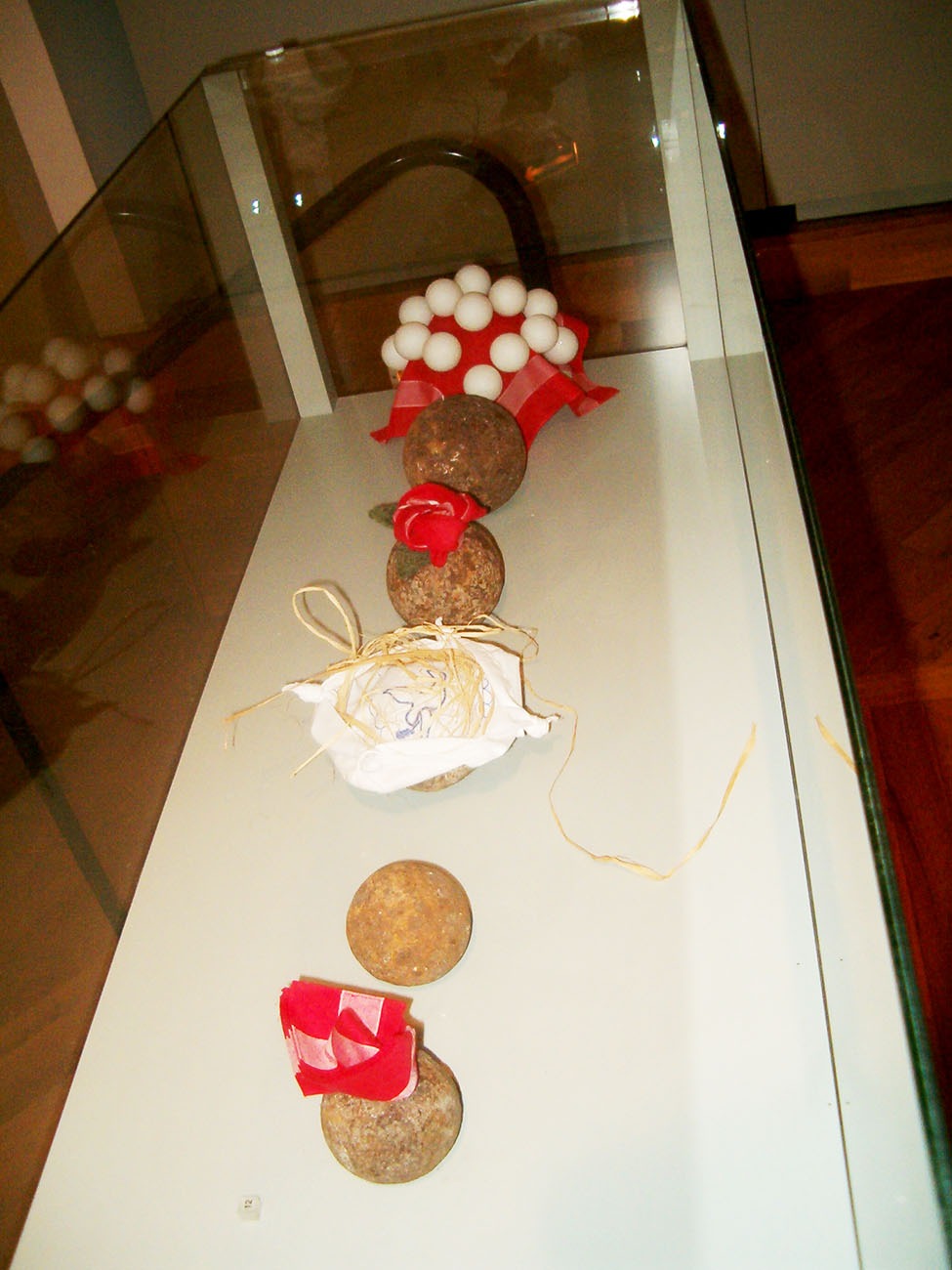